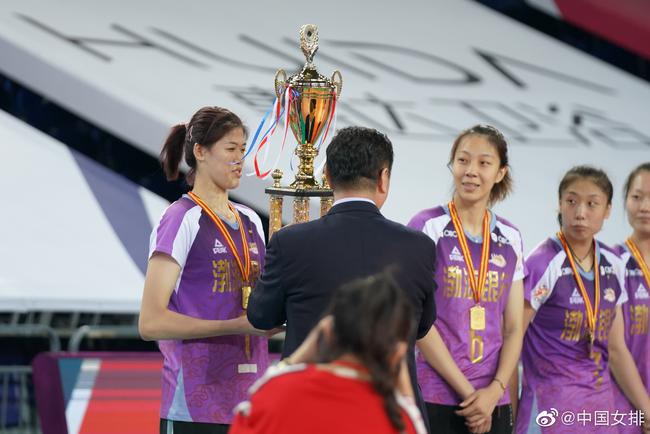 Due to the epidemic, foreign players are prohibited from participating in the Women's Volleyball Championship. However, the participation of many national players has still attracted a lot of attention.

After the championship, the women's volleyball Super League is about to start in the new season, and the return of foreign aid will be more eye-catching, and the popular star Zhu Ting is expected to return to the court after recovering from his injury. Li Yingying picked up the championship trophy.

In the past, women's volleyball national championships often sent second-line lineups to train their teams. The "specification" of the game was not high, but this year's situation is different.

Due to the epidemic, global women's volleyball events, including the Olympics, have been suspended. As the first official competition since the epidemic, this year's championship has attracted many national players to join.

In the finals, Li Yingying continued her high-profile performance in this tournament, repeatedly contributing points at critical moments, helping the team easily lock the championship trophy 3-1. According to statistics, Li Yingying scored in the semi-finals and finals respectively. With 34 points and 33 points, Tianjin's biggest contributor to winning the championship.

It is worth mentioning that this event is the first time that Li Yingying has led the Tianjin Women's Volleyball Team as a captain to compete in a domestic event. She also successfully completed the task for leading the team to win the sixth championship in the Team History Championship.

Li Yingying herself also said that the role of the captain presents more challenges for herself. "I have improved my awareness after returning from the national team training. I have improved my mentality on the field, but I still need to improve. Before becoming a captain, I just wanted to be good at myself. I want to mobilize everyone now." The fitness test did not affect the ranking

Same as the current domestic competitions in multiple events, this women's volleyball national championship also has a physical fitness test.

After each team arrived at the competition venue, two days before the official competition started, all the teams took physical tests. It is reported that there are a total of 10 physical fitness tests, including 3000-meter running, bench press, squat, 30-meter sprint, etc., sitting forward bending, etc. Each event is 10 points out of 100 points. Each team will have 12 to 14 athletes to participate. , Take the scores of the top 12 players to calculate the team's total score.

Like the Men’s Volleyball Super League that has ended before, the women’s volleyball national championship also follows the policy of not using foreign aid, and all teams play in the Chinese class.

Compared with the "international" confrontation created by foreign aid, the all-China class lineup may decline in starlight, but this also gives more opportunities for local players to exercise.

For example, in the Shanghai women's volleyball team that entered the semi-finals, the young main attacker Zhong Hui and the veteran counterpart Zhang Lei have both performed brilliantly. In the Guangdong women's volleyball team, there are also eye-catching newcomers like Chen Peiyan and only 15-year-old Wang Yifan-from training local From the perspective of players and young players, this championship completed the task.

Naturally, those national players who have become famous are still more concerned. The main players of the first-line national teams such as Li Yingying, Zhang Changning, Ding Xia, and Wang Mengjie are still the Dinghai Shenzhen needles of their respective teams. Because the players who have not played for more than half a year have expressed their opinions about this. The importance of this opportunity.

As Zhang Changning said, "Without foreign aid, I think this is a good opportunity to show the ability of local players. We cherish this opportunity very much."

According to the announcement issued by the Chinese Volleyball Association a few days ago, the women's volleyball Super League will be opened again in November in the new season. Under strict epidemic prevention management, teams will be able to use foreign aid to participate.

After the all-China class exercise, each team will usher in a higher intensity confrontation. And in addition to foreign aid, there is a change that is more appealing to the audience-by then, Zhu Ting, who has missed the championship due to an injury, is expected to return to the arena.